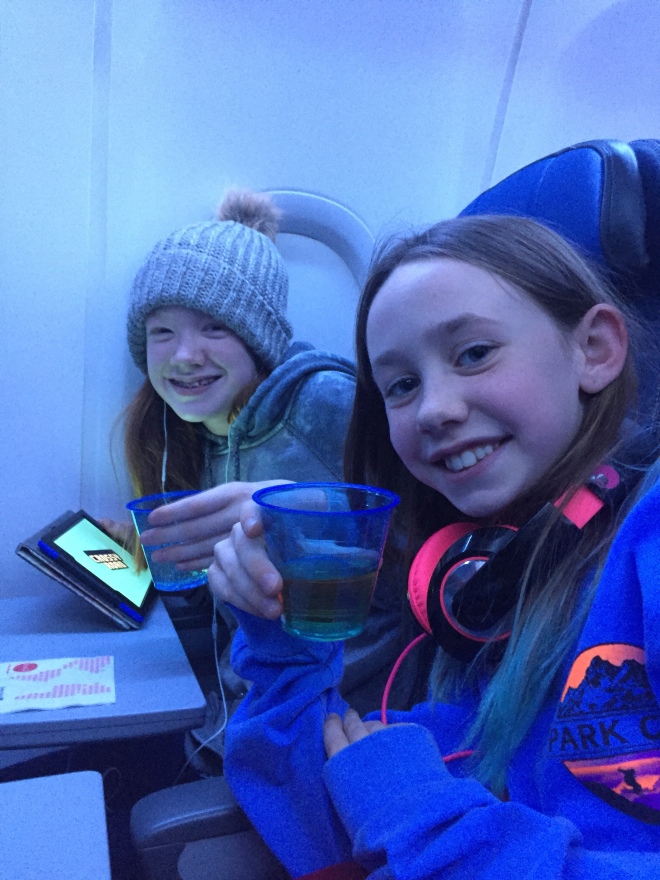 Wow what a day yesterday was. Woke up to it dumping snow, which added unnecessary stress, and flights being canceled all over the place. We made it to the airport to find that our flight to Seattle was delayed 1 hour due to a late arrival of our plane. Since we had plenty of time to waste we took our time making our way to security. Once there I was very surprised to find that Sienna had TSA pre-check which got all three of us right through security, which was extremely long.

Dulles International Airport has made major upgrades, installed a new transit train, but yet they still have these old ass “monster truck” shuttles.

We made it to our gate and then the search for dinner began. Unfortunately the girls decided on a weird Pizza Hut/Wings Restaurant. I mean really? Pizza Hut on one side of the menu and wings on ther other side, but not from Pizza Hut, and a bar menu. So the girls had a mishmash of food while I enjoyed a nice cold beer, a much needed one!

Back to the gate, boarded, took our seats, and plugged in my phone which was running low on charge. Once in the air, I got both my girls connected to the United wi-fi so they could access the entertainment. Which made them both very happy, as you can see below.

But that didn’t last long. The wi-fi on the plane went caput for everyone! The pilot tried to restart the whole system but that didn’t fix the issue. And then the power in our row didn’t work. ARGH!!!!! I spoke with the flight attendant and he apologized for not being able to fix my power issue so instead he offered “how does 5,000 miles to your United Mileage Plus account help?”. Sure why not! So I just closed my eyes and drifted off to sleep. But being 6’4″ and with ZERO leg room, I was just praying for comfort.

Once landed we were greeted by a great friend, Jaime Wilson, who was in Seattle for business and taking the same plane back to DC. Too funny but great to see him. After a brief chat we grabbed our bag, jumped into a cab, which by the way was a Prius, and who drove like a bat out of hell. You would’ve thought he had a pregnant woman in the backseat about to give birth.

We finally made it to the hotel and reunited with my my beautiful wife.

And today the girls and I are about to venture out, in the rain of course, to the original Starbucks then the Seattle Aquarium.