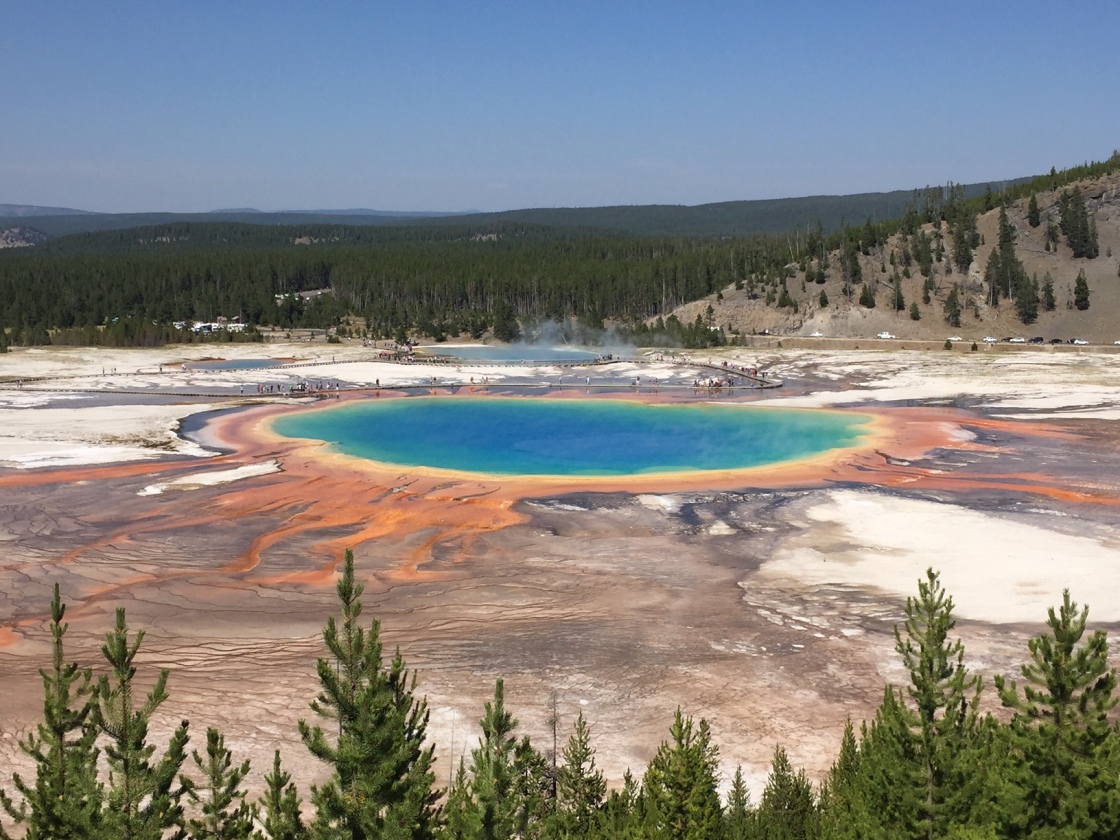 My Day That Could’ve Been

We had a master plan for our one full day near the Old Faithful Inn, on the southwest side of the park – geysers, mud pots, fumaroles, and springs (plus a waterfall).  Our day did not go as planned, that is for sure.  I am writing this post because Rodney spent the day laid up in our hotel room with food poisoning!  Too much tartar sauce slathered on trout (from a buffet, always a no no!).

I became designated driver, the first time I have driven our rental mini-van because Rodney wouldn’t let me drive the whole way out west!  The van drove fine (but I would still never get one).

Our first stop at 7:30am was the Midway Geyser Basin.  We wanted to get there early because when we drove through on the way to Old Faithful Inn the day before, it was PACKED!  I mean really crowded.  The lot was crowded, there were cars all along the road.  Crazy!  We loved getting there early because it was so quiet.  The one draw back, lots of steam, which made it difficult to see the springs. But they were still beautiful! We did learn something very important about the Grand Prismatic Spring.  You cannot comprehend its beauty at eye level.  You HAVE to see it from above! We chatted with a lovely couple who told us to to park at the Fairy Falls lot/trailhead and walk up the hill to the observation overlook to see the spring from above.  We all agreed to come back late afternoon to do just that.

Part of our original plan for the day was to hike Fairy Falls, but we found out the trail was closed, from the same couple who told us about the observation overlook (I bet Rodney was secretly happy he didn’t miss out on this hike).

We went ahead and stopped at Biscuit Basin and Black Sand Basin on our way back to the Inn.  These were not quick stops because both of these basins had amazing geysers (Cliff Geyser) and springs (Sapphire spring).  I would highly recommend Biscuit Basin.  It doesn’t get the foot traffic that Midway Geyser Basin gets, and has so much more to see!

After being gone for a few hours, we headed back to check on Rodney, who was still down for the count!  Off to our planned laundry day we went!  Four washers (on of which was out of order) and six dryers is not enough for the Old Faithful Inn/Lodge and Snow Lodge complex.

Back at the hotel, Rodney had showered and looked a little back to normal. We headed to dinner at the Lodge cafeteria (which we would not recommend), then to hang out for a bit in the Inn’s lobby, for a final goodbye.